South Korea: Day 7 - In the Mountains of Busan: A Fortress, Seokbulsa Temple and the Ancient Tombs Park

What makes Busan so unique is its diversity. Today, we were headed for the mountains. So, we walked from the 369 Hotel in Busan to the nearby Yeonsan Subway Station and took a subway to Oncheonjang Station. From the station, we retraced our steps to Hurshimchung, where we had been two days ago, took Exit 3 and walked across the bridge over the street and then through the shopping mall building and into the Oncheonjang-ro 119beon-gil. Then, we walked past Hurshimshung (we would come back later) and towards Oncheon Open Air Foot Spa. It starts from the street Geumganggongwon-ro 26beon-gil and is located at Oncheon-dong135-5. It´s basically on the way to the cable car station, so we wanted to include it. Unfortunately, it seemed closed.

Soon, we arrived at the Busan Marine Natural History Museum. We wanted to take a look, but then weren´t in the mood to enter and instead continued to the cable car in Geumgang Park. Our primary focus, after all, was the Mount Geumjeong - and the Geumjeongsanseong Fortress. The weather wasn't that great, and there weren't many other tourists. So, we took off with the cable car and enjoyed the fantastic view.

There's a restaurant and some seats up there, but we just took a look at the signs and walked to the nearby Hyujeongam Hermitage, just to take a quick look.

We returned to the main path and walked towards the South Gate (Nam-mun) of the fortress. It is a nice stroll through the woods and we could just follow the signs. However, at one point, there was a forking of the path and we weren't sure which way to take. At one branch there was a sign for some destinations, but not the South Gate. There, we eventually took the other path to the right (without a sign). Shortly after, another sign confirmed that this is the way to the South Gate. At another branch, at a restaurant, we just asked. The rest was easy to navigate and soon we reached the South Gate.

The South Gate was only the appetizer, however. We really wanted to hike from there to the Seokbulsa Temple - a mountain temple with Stone Buddhas carved into the rock. We had read online, that you have to take the path to the left, when you reach the South Gate, downwards. And indeed, there was even a (new) sign from the South Gate to the temple and Namman Village, that we followed. 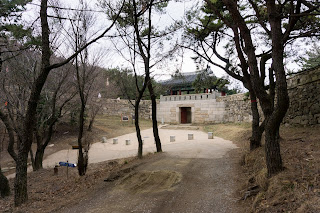 When we arrived in Namman Village, we didn't see any sign that made sense to us and thought, that there is just one way through the village, which was somewhat deserted. But it felt wrong, and we returned and saw another trail to the right. We asked a woman, but she basically ran away, saying something in Korean, which must have been something like "I don't speak English, don't bother me." However, we found out that we're on the right trail. The path on our right goes through Nammun Village. We were delighted when, eventually, a sign appeared, to confirm that.

After some hiking, the path ended at a street, and we had read before online, that you have to go follow this road upwards to the right. We did so and then took a short break at a kind of fitness court, where we also found a basic toilet (don't expect a toilet bowl). We then continued to walk along the (steep) street up to a mountain, where we eventually found the Seokbulsa Temple. 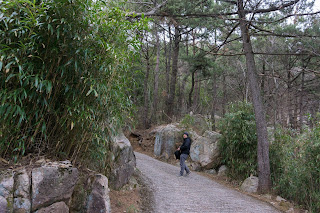 It was quite exhausting but well worth the effort. The Seokbulsa Temple offers a lot of interesting statues, ornaments, a huge bell and you have a great view from there. But the main highlight is the huge Stone Buddhas, engraved in the mountain.

After taking our time at the temple, we followed the road downwards, until we saw a sign for a path to the Mandeok Subway Station. We followed the trail and, in the end, walked down the first street to the right (I think Gumandeok-ro) until we came to a more rough road and eventually reached the station. There was still time for another visit. So, at the station, we took an elevator what felt like ten floors down to the tracks (the station must be a huge underground construction) and took the subway from Mandeok Station to Minam Station. There, we changed trains to get to Dongnae Station. From there, we walked into the Myeongnyun-ro 129beon-gil.

The street has many restaurants. But first, we bought tissue papers, as we were getting a cold!  Then I had a traditional (very late) hot soup (I think) with a variety of little dishes, including Kimchi (which seems to come with every meal). My friend preferred to get something from one of the many bakeries. We walked to our next destination, the Bokcheon Museum, to look for a pharmacy, as my friend wanted to get something to free his sinuses. We actually found one, but it wasn't that easy to explain without speaking or understanding South Korean. However, they were very friendly and helpful and eventually we got some kind of powder and hoped for the best...

Finally, we reached the Bokcheon Museum, a large archaeological museum and it was free! There, of course, I tried on traditional clothes. We also saw a lot of artifacts, and they offer information on the Bokcheondong Tombs, that is just outside the museum. That was a significant reason for us to come - it is also kind of an open-air museum. The Bokcheondong Tombs are a royal burial ground of Geumgwan Gaya. The museum also exhibits items from the Gaya Kingdom, that were found in the tombs. There's historic pottery, horse masks, armor, weapons, and accessories.

When we were finished with the modern and interesting museum, we continued to the ancient tombs. It is basically a hill, and a path from the museum leads to it. It is a vast site and looks rather impressive. There's also a center to get a look at the excavation, but it was closed already.

Eventually, we walked back to the Dongnae Station and decided to reward ourselves with another visit at the hot spring Hurshimchung. It was just two stations with the subway to Oncheonjang Station, where we took Exit 3 and walked again to the large spa. We already had been there two days ago. They have so many hot baths with different temperatures and also some saunas. After so much walking, it was nice to relax, especially under the hot massage waterfall. 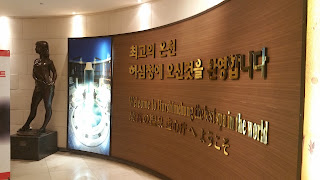 When we finally went back to the hotel, we had to pack our bags. The next day we would already leave Busan and continue our journey to Gyeongju, South Korea's "museum without walls."

I have to say, I really like Busan. It has so many attractions of a wide variety to offer, and we could easily have stayed some more days. With more time at hand, we also would have visited more temples like the Beomeosa Temple and the Samgwangsa Temple, the Taejongdae Area, the Busan Gamcheon Culture Village and the National Maritime Museum. Due to the subway and the Busan Citytour Bus, Busan is also a very convenient destination for foreign tourists. 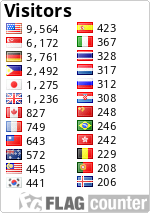